4 insights on successful presentations – Angklung anyone? 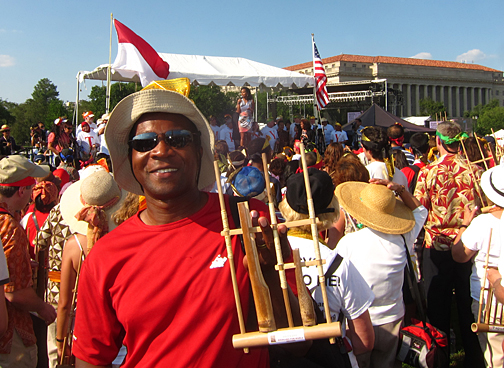 At the invitation of the Indonesian Embassy in Washington, DC, on July 9, 2011, I was one among 5,182 who set a Guinness World Record for the largest angklung ensemble. Never heard of the angklung?  Neither had I until two weeks before the event.

The angklung is a one-note musical instrument that comes from Indonesia.  It consists of two or more movable bamboo tubes attached to a bamboo frame.  You play the angklung by holding it with one hand at the top and shaking it with the other hand at the bottom. It takes eight differently noted angklungs to play a scale.

To help set the Guinness World Record, the Indonesian Embassy had flown in angklung maestro Daeng Udjo from Jakarta, Indonesia.  He directed the novice, but enthusiastic group by using hand signals.  He demonstrated the hand signals as he taught us how to play a scale.  The final test for us was following his hand signals to play the official song, “We are the World,” to set the world record.

Yes, we did!  An official adjudicator from the Guinness Book of Records watched the performance and then announced that a new World Record for an angklung ensemble had been set*.  She said, “You’re unbelievable.  And to think that you have never played the instrument before.”

Being part of setting a Guinness World Record was an amazing event, but it also provided me with four insights that directly relate to successful presentations.

1) Team effort – You’ll never see a one-man Angklung band.  Playing a song with the Angklung always takes teamwork and cooperation. Our group used a series of 10 differently noted/tuned angklungs.  And, as our Guinness World Record was about number, having a cooperative team of 5,182 was critical.  The best presentation is a team effort between the speaker and the audience.

2) Visuals speed learning – Our angklungs had labels at the base with images of the hand signal assigned to each instrument’s note.  When the director gave the corresponding hand signal, you shook your angklung.  These labels also helped to orient the instrument.  When the sticker was facing you, the Angklung was held correctly.  Visual learning made for faster comprehension of the task.

4) Being fully present counts – Because of the nature of the event, most of the participants possessed cameras or video recorders.  All of us were admonished that for the world record attempt to count, no one could be caught videoing and not playing their instrument.  For the five minutes of the attempt, all of us would need to be fully present and engaged in the task at hand, establishing a Guinness World Record.  Being fully present and focused on the task at hand was the only way we could achieve our goal.

* My World Record holder status, like any good presentation, is highly ephemeral.  If 5,182 people can gather to set a world record in Washington, DC, I’d imagine that this record would be topped when/if they attempt this in Jakarta.  Until then, I’ll enjoy my status as a Guinness World Record participant and thrill in the memory of an amazing event.

Charles Greene III is a true Presentation Magician. Working with Fortune 500 companies, he’s a magical spokesperson who delivers product and marketing messages at conferences around the globe. Through his company Corporate Shuffle, Charles has presented at meetings in Bermuda, China, Egypt, France, Mexico, Monaco, Sweden, and, of course, the United States. His clients span a variety of industries and include 3M, Alcon, Coca-Cola, Clorox, Frito-Lay, Johnson & Johnson, Panasonic, and Wells Fargo. Charles’ public speaking and presentation workshops are engaging, educational, and empowering. With more than 25 years of experience as an international corporate spokesperson, Charles leads by example. He captivates attention as he delivers critical presentation skills. His workshops cover the core skills of public speaking as well as presentation techniques learned from decades of corporate presenting. Charles is a guest columnist for Presentation Magazine. He’s been featured in Discover, The Washington Post, The Wall Street Journal, and The Robb Report. When not for revealing the secrets of better public speaking, Charles spends time collecting vintage magic posters, stone lithographs of magicians from 1890 – 1930. To see some of his collection, visit www.MagicPosterGallery.com. He can also make a mean gumbo. Charles was born in Hackensack, NJ. He currently lives in the historic Columbia Heights neighborhood of Washington, DC.
View all posts by Charles Greene III →
This entry was posted in Public speaking and presentation skills and tagged angklung, Guiness World Record. Bookmark the permalink.

2 Responses to 4 insights on successful presentations – Angklung anyone?